November already?!?! While all of America wakes to a new leader of the free world, here in Tasmania we awoke to signs of a fast approaching summer of cycling. Today was another of those fantastic yet unplanned metric century rides. I’d packed enough snacks and water to go the distance, but on fatigued legs I wasn’t sure if my body would go the distance!

Out the door early I tried to shake off sluggish, heavy legs with a solo 40km out to join the regular “SunDaze” ride at one of their pick-up points. It was another day on my 2002 US Postal Trek 5200. Although slower than the Aeroad, I just love it and it’s one insanely beautiful bike. It also garners plenty of attention, especially with riders over 40 who remember the Armstrong and “Blue Train” era well. Even more so if I rock up in full Armstrong era kit. 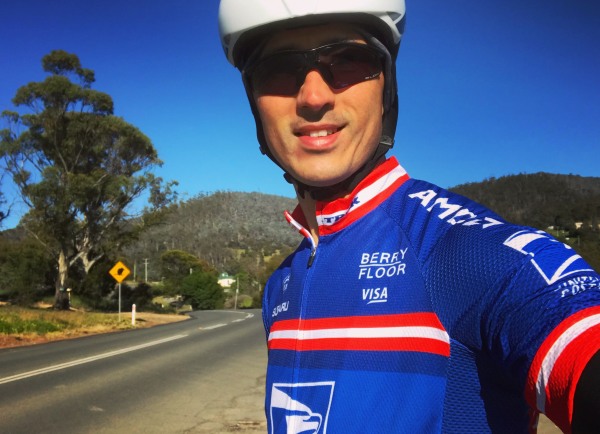 Waiting alone at the pick-up point I was starting to wonder if the bunch were even coming, but sure enough (although 10 minutes late) they appeared in the distance. I clipped in and  slipped into mid-pack as they rolled by. A little further up the road I saw that four riders had opened up a 30 metre gap on the rest of the group and were pulling away. I took the bait and jumped HARD on the pedals, sprinting out of the bunch to close down the gap. It was a high-end effort and I paid for it dearly over the rest of the ride.

The pace to Richmond was HOT today. I’d naively expected a more relaxed “cafe cruise” but the strong riders were keeping it pinned! I managed a few short turns on the front, but for most of the ride I was holding near threshold wattage just to stay on the wheel. Sure, being on the 20-year-old Trek 5200 was going to be a little harder when surrounded by modern aero bikes, but that’s no excuse. I tried to hang with the front runners and just didn’t bring my A-game.

After a short debrief over coffee at Richmond Bakery, I left the group and headed home via the backroads. Even after the rest, my legs were still suffering from going deep into the red chasing the strong riders earlier. I was keeping a steady pace on the rolling roads, but starting to suffer on any steeper pinches.

About 2km from home I hit the final short but steep climb. A section best attacked out of the saddle. I rounded the bend at speed, hit the climb and punched it! It was then my legs finally said NOPE! THAT’S ENOUGH! I was forced to sit back down, shift up the cassette a few gears and spin up the climb, cresting the top rather slowly before descending the final kilometre to my driveway.

I pulled up at my gate and stopped my Garmin, not even knowing if I’d hit 100km. I wasn’t going any further today either way! Thankfully, I’d hit the mark and ticked off number eleven of the 2020 Metric Century “Resolution Ride” Challenge!