Getting up and loading my Trek 5200 into the car, I had no plans on knocking out 100km this weekend, just an early solo thrash before meeting up with The Herd for their Saturday ride. I wanted to get some more saddle time on the Trek and test out the bike fit adjustments I’d made. I hadn’t seen some of The Herd crew in ages too, so was looking forward to catching up and having some wheels to share the load with.

And sharing the load certainly came in handy! The outward leg of their ride was bang into a headwind (better than on the return leg that’s for sure). Three of us stronger riders took turns pushing into the headwind, giving shelter to the three others tucked in behind. I was feeling fresh so didn’t mind spending extra time up front. As a smaller rider, I sometimes wonder how much shelter the guys  get behind me. I certainly notice the difference when one of the bigger guys gets on the front! 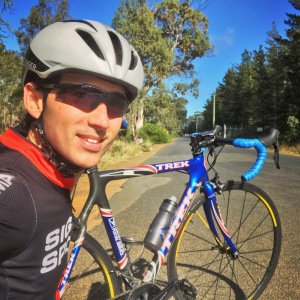 Hitting the turn after 25km in the breeze was a relief and we quickly upped the pace for the return. The wind had swung around a bit, not quite the direct tailwind we were hoping for but still enough to give a friendly assist. Those bike fit changes must have been spot on as I was feeling awesome and kept hitting strong turns up front.

Nearing the car park (and cafe) I looked down at my Garmin and saw 82km – my early solo 30km plus the 50-odd for the group ride. My legs were still feeling good, so I thought to myself WHY NOT? I let the guys know as they peeled off to the cafe. I threw down a gel, finished off my bidon and put the hammer down for a final 18km circuit to roll back the cafe with 100-and-a-half on the head unit. That’s nine resolution rides ticked off now with better weather to come! 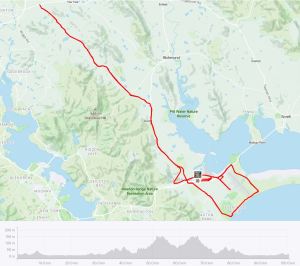 A quick coffee and debrief with the The Herd and I was home before midday! Usually after a metric century ride I’m pretty tired, but today I was FULL of energy. After lunch I washed the dog, checked off some odd jobs and spent a few hours mowing the lawns. I finally crashed out on the couch around 6pm with a tasty Southern Fried Chicken Burger and a bottle of local cherry cider. That’s one productive Saturday I recon!