Two thousand and two. Nelly was getting Hot in Herrrrrre, Christina Aguilera got Dirrrrrty and the first mobile phone with a built-in camera was released in the USA. Meanwhile in the world of pro cycling, US Postal were dominating the scene on their carbon fibre Treks and Lance Armstrong was the undisputed king.

I’ve been on the hunt for a “classic” Trek 5200/5500 for some time now. It’s been fuelled even more so by Big Jim of Fit Recovery’s beautifully restored Trek 5200. They’re getting rare in general, even rarer to see in Tasmania, rarer still to see one for sale! So when one popped up on a local buy and sell group, my interest was peaked.

Unfortunately I was looking down the barrel of a 700km (440 mile) round trip to look at it, so when the owner said he could get it down to Hobart for me, I jumped at the chance! You don’t have to ask me twice! I said I’d take it. Cash. Sight unseen. I didn’t even haggle over the (already very reasonable) price he was asking. 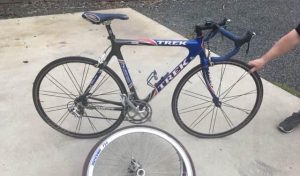 Above was the photo from the ad. If you ever want a masterclass in how NOT to photograph a bike for sale, take a good look at the photo and that basically covers all of it.

It was a gamble, but I think it’s paid off. The fact it’s got full US Postal team paintwork made the find even sweeter! From my research and the paint, I make it a 2002 model Trek 5200 (the 5200’s were Ultegra and the 5500’s Dura Ace, frames identical). He even threw in a pair of new cycling shoes which just happened to be my size! #winning

The frameset is in great condition for it’s age. It’s certainly been ridden but it’s a well cared for single owner bike from new. It’s even got frame wrap to protect against cable rub. Running gear is currently the original full Shimano Ultegra (9-speed) with a properly old school hard man’s 53/39T big dog!

My first job will be to strip it down for a full clean and inspection before I decide what direction I’m going to head. Do I keep it original? Or update to modern 11-speed components? It’s going to get ridden so it’s got to be good! More to follow as I get stuck into this beauty. Oh how I do LOVE a good project! :-)