Wait, didn’t I already complete this month’s ride? Now you mention it, yes I did. Kind of, but not really. You see, after my virtual 100km I just couldn’t shake the feeling that it didn’t really count. Road bikes were made to be ridden outside. Smooth blacktop beneath your wheels, clear blue sky above (usually).

So on another chilly Tasmanian winter’s morning I dropped the wife at work and set off to make things right. It was a full winter kit kind of day, but thankfully clear sunny skies and only a slight breeze. I had a bit of time to kill before meeting the guys in Lauderdale for the “Tuesday Bash” ride, so I locked in a decent clip and kept my average touching 30kph. I was either making great time or my mental calculations were way off, as I had to throw in an extra loop clocking up over 50km before the meet up! 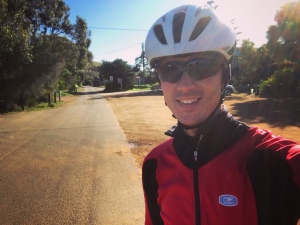 Don’t let the sunshine fool you, it was still 2 deg C to start out!

I love this bike!

Rolling up in Lauderdale, the guys told me we were extending today’s bunchie to go up Rifle Range Road, meaning a few more kilometres before coffee and a solid Cat 4 climb that I hadn’t done before. I had a clear schedule so why not! We set of towards the climb, swapping turns and shooting the breeze. The climb was a good one – not too tough but enough to shake off the winter chills –  although I kept it low key just spinning in the 28T cog so as not to split the bunch too much.

Regrouping at the top, Paul decided to take a gravel “short cut” back to the cafe, saying he’d race us back there. What was that? Did he say RACE? Oh he said RACE! That’s officially a race so the rest of us four stuck to the road and it was on! The race to the cafe is fair game,  survival of the fittest, so I got on the front and set a lively pace.

Never be the first one to pop…

I had three other wheels lined out behind me as I held pace on the front. Just as I was contemplating swinging off I took a quick glance back and saw that it had dropped to just the one. Graeme was on my wheel, but I could tell from his body language he wasn’t going to come around for a turn. I eased off a touch so he could hang in my draft. Sometimes you’ve just got to suck it up and help a mate out – even if it means doing a 10km turn on the front into a headwind! 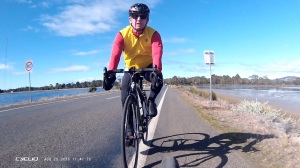 Needless to say, we beat Paul back to the cafe and I was half way though my double espresso and muffin, relaxing in the sunny courtyard before he rolled in. After a quick debrief I left the guys and headed back, eating up the final stretch to the car and finishing with a bit more total distance than I was planning to do! Not bad for a Tuesday morning, not bad indeed.