Tasmania is COVID-free! You heard right, there are officially ZERO cases of Coronavirus in Tasmania, although on mainland Australia they are not quite so lucky. In other good news, we’re allowed to ride in groups again! It’s been a LONG time since I’ve ridden in a bunch. I can hardly recall a time before COVID-19 where we could meet up and swap turns on the front, ticking off the miles in the company of like minded souls. I’ve missed it.

Waking to another typically chilly mid-winter morning I geared up in full thermal kit and wheeled the “good bike” out of the garage. There’s a 1km uphill drag leaving my house that I tried my best to warm the legs on before attacking the rollers along the highway into town. With a bit of time to kill, I knocked out a solo 40km before meeting the bunch for an easy cruise and catch-up as we rolled towards our “destination hill” of the day, Mount Rumney.

With an average gradient of 7% and a 17.5% max, Mount Rumney is a solid Cat 3 rated climb and one of Hobart’s Top 10. A little gem hidden out of town. Climbs are open territory on most group rides, you hit them at your own pace and regroup after. Not wanting to blow the group apart too early I sat on second wheel for a minute, before launching off on my own.

Rear camera to capture the struggle! Drop the hammer in 3, 2, 1…

A short sprint out of the saddle to snap the elastic followed by a “comfortable” threshold pace quickly put the rest of the guys behind me with only Andrew following my wheel. I could hear him a few bike lengths back, his heavy breathing giving him away! 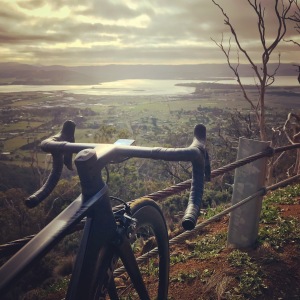 A quick photo at the top before cruising back down.

Cresting the mountain first (of course) I knew the guys would stop at the top for a breather so I whipped back down the descent and turned around for a second crack at the climb! I got 95% of the way back up before the descending pack passed me.

Two climbs of Mount Rumney done, I slipped back into the bunch as we sped towards to the coastline for coffee. The double ascent had put a dent in my legs so I was hankering to re-fuel and grab that first caffeine hit of the day! 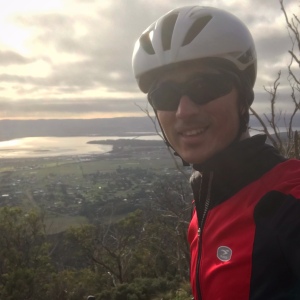 It was getting late by the time we reached the cafe so I quickly devoured my granola slice and double espresso before leaving the guys for home. Fuelled and recharged, I lifted the pace and hammered out the final 30km to my door. I hit the driveway with 117km and change on the Garmin, feeling great. The thought of “rounding up” to 120 crossed my mind for a second, but decided to save that for a warmer day.

Oh, and did I mention that I got a new bike? ;-) #keepcycling