With 101 riders in the starting pen for Stage 1 of the Tour of New York series this was going to be a blast. Technically not a race, but still raced by the majority of Zwifters! Stage 1 was the New York Highline – a lumpy 8km lead-in, followed by three ascents of the KOM, finishing atop the third climb for a total of 32km. The combination of some punchy lumps plus three times up the KOM meant it should be a favourable course for me.

The flag dropped and in usual Zwift race style we’re out of the blocks at full gas! I quickly burn my first match trying to make the lead selection. I make the cut (just) and stick with a group of 20 for the lead-in to the first climb. I know I can’t continue at this pace and half way up the KOM the elastic snaps. The depleted bunch disappear up the road without me.

Cresting the KOM I’m joined by two other riders who couldn’t stick with the front bunch either. Together we team time trial our way around the circuit, keeping a fast yet sustainable pace.

I make sure to take solid turns on the front to test their legs, but ensure I stay rested enough for the finish. I’m confident rider one can’t stick with me up that final 1.5km climb, each ramp in the road opens up a gap that he has to chase hard to bridge. Rider two I’m not sure of. We continue our TTT blowing past a few riders, moving us into 10th/11th/12th place.

Into the last 3km and in an attempt to shake things up I increase the pace, looking for a reaction or counter attack. I get nothing, both riders still sitting on my wheel.

I know I’ve got one or two decent attacks left in the legs so at 1500m to go (the start of the final climb) I lock it in above threshold and grit my teeth. As predicted rider one cracks and is soon off the back. Rider two stays with me at first, but slowly I open up a gap. Two seconds, then five, then ten. I’m on my own.

I see another rider ahead who had obviously blown early. If I pass him, I’m inside the top ten! My legs are burning, the road is steep, but I’ve got one last match to burn. I wait until 600 metres to go where the gradient ramps to over 15 percent. I’m right on his wheel as I launch out of the saddle, punching my biggest effort of the race and ….

Okay, not literally. But still. It hurt. On the inside.

Zwift completely froze on me – leaving me staring at my virtual self, less than six hundred metres from the line in 9th place! An empty bidon may or may not have been thrown across the garage. Pure frustration! Nothing left to do now but climb off the bike and hard-restart the laptop. 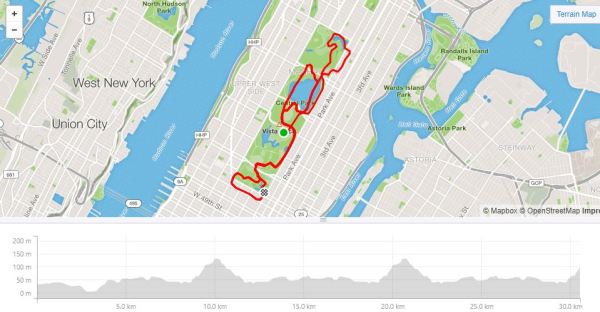