Surfers share a lot in common with cyclists. They get up early, they chase endorphins, they check the weather a lot and they’re always thinking about that next awesome ride. They are also very N+1 with their equipment! There’s a term in surfing circles; the quiver killer! It refers to one versatile board that will do it all. The term is also slung around in snowboarding and mountain biking circles.

It got me thinking, is there such thing as the “quiver killer” for road cyclists? One bike that can do it all, negating the “need” for a garage full of bikes? It’s a toughie! Surely you need a lightweight climbing bike, an aero speed machine, something for wet weather, something for stints on the rougher stuff, etc…

My CX bike is a good example of an all-rounder. I’ve had it in full aero mode (like the photo above), commuter mode with mudguards and rack, offroad mode with knobblies, plus a few more guises.

If I were to only have one bike, it would probably be a gravel bike. Gravel bikes seem all the rage at the moment and I simultaniously “get” and “don’t get” them. To me, it seems they are essentially a modern take on a touring bike, with a big helping of marketing spin thrown in!

As for a quiver killing all-rounder, they seem to fit the bill. I’d go for one with an aggressive geometry carbon frame and hydraulic discs. Is it cheating to have two wheelsets? If not, then I’d have one set of wheels with wide 50mm tyres for tackling singletrack and towpaths, plus a second set of road wheels, maybe 40mm deep carbon shod with fast 25mm rubber for mixing it with the clubbies. Shimano Di2 of course, because if you’re only going to have one bike you gotta make it sweet!

Disc brakes on road bikes; ugly as sin but it’s the future.

That would cover 99% of all the “road” riding I’d ever do. Sure it couldn’t take on any serious offroad downhill bombing, but that’s not for me. I don’t think you could ever get a single bike to ride everything well. It’s always going to be a compromise. In fact trying to build a quiver killer road bike would probably see you having something that is mediocre at most jobs. A “Jack of all trades, master of none” scenario. Like my CX bike above. Sure it’s fast, but not as fast as a proper aero bike! You could however do well enough with one multi-tasking bike.

But I’d never do that want to do that. 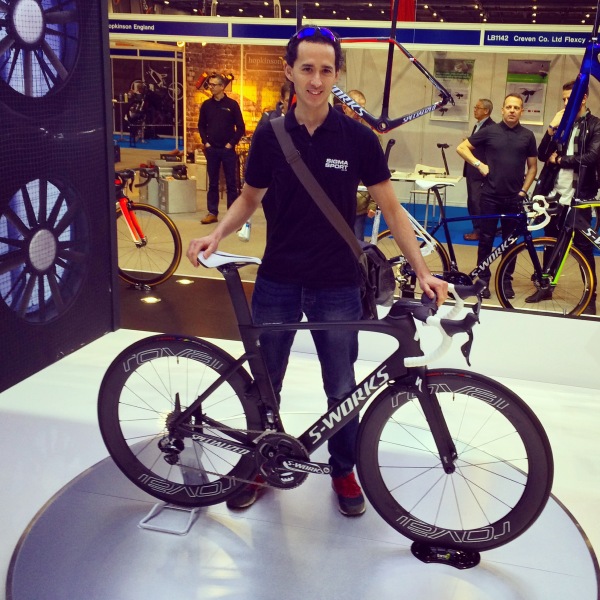 Because where’s the fun in having only one bike? ;-)