So on a whim this morning, I signed up for the 2017 Zwift Academy!

This year alongside the women’s event, Zwift have teamed up with Dimension Data to offer a men’s Academy! Dimension Data have even offered a spot on their continental squad to the top male graduate under 23 years of age. Of course, for us oldies and mere mortals it’s simply a chance to take on some free structured training. Plus for every ten graduates, Zwift will donate one bike to underprivileged communities in South Africa. Talk about a win-win!

In order to “graduate” from the Academy, you need to complete eight structured workout sessions, five group rides and two Zwift races over the next six weeks.

Being a rash sort of guy, I signed up this morning and completed the first workout this afternoon. This was (surprise, surprise) an FTP test. What fun. The hour long workout started with a long warm-up, followed by a 20-minute all out hammering at a pace you think you can sustain for that period, then a gradual cool down. 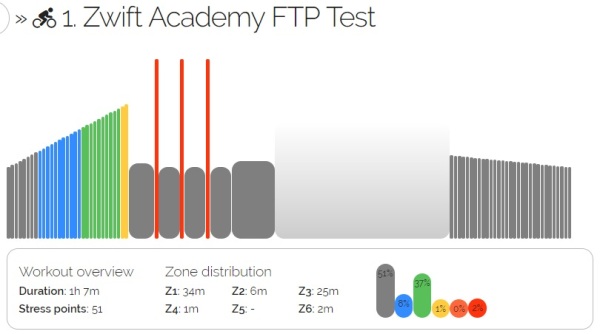 I’d forgotten how much these tests hurt. I’m not sure why I chose to do this test today, especially as my legs were pretty achy after yesterday’s 70km ride. I guess I just wanted to get it over with! It’s been a long time since I’ve done a “proper” FTP test on the turbo and I do not miss them!

So that’s one workout down, seven more to go… #RideOn