Well, it’s official. The Coronavirus has killed off the club ride. Okay so maybe that’s a slight overstatement, but it’s not far off the truth.

In a statement released earlier, Cycling Australia have recommended that; “all organised club activities that involve close contact be suspended.”

The statement goes on to advise; “If riding two abreast, keep the maximum allowable gap of 1.5 metres between riders and a gap of at least 1.5 metres to the rider in front of you, including while stopped at intersections. Limit groups or bunches to 10 or fewer riders.”

So the advice for group rides is to stay 1.5 metres apart side-by-side and leave at least a 1.5 metre gap to the rider in front?

One point five metres! Or FIVE FEET APART in imperial measurements! That’s close enough to a whole bike length! Forget about a decent draft effect. Forget about a close knit, efficient bunch cruising down the road at speed.

When drafting a reliable wheel in front at high speed I’m talking in inches, not feet! Those guidelines might be okay for the casual cafe cruise, but certainly not any decent-paced bunch.

The Cycling Australia statement also recommends at cafe stops cyclists should “keep helmets, gloves and sunglasses away from tables.” That’s good advice in general – sweaty helmets on cafe tables is a huge pet peeve of mine, but that’s a WHOLE OTHER post (and mega rant).

I’ve seen on social media that many clubs have already postponed any further races and even cancelled their official club rides. The government in Italy and Spain have gone as far as to actually BAN recreational cycling completely. It seems we might soon have to be indoor-only cyclists after all, hahaha! 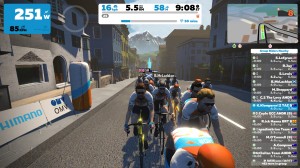 Anyway… At the end of the day it’s a first world problem. Being able to cycle is the least of a lot of people’s worries at present. We should manage our own risk and do what we can to keep ourselves safe and protect the more vulnerable.

Stay strong and healthy out there! :-)