Opening up  to a wave of Beta testers last week CVRCade is the latest offering in the indoor cycling scene. Their aim is to become a big competitor to Zwift and to host all the CVR Virtual Racing Leagues, many of which offer real prize money. That is a big call.

All the pre-release info was “iffy” to say the least, but I’m not one to knock anything before giving it a chance, so I downloaded the Beta and climbed aboard my Tacx NEO. The first step is to update your profile and choose your bike. At present you can only choose from two, both weird 80’s sci-fi motorbike things. Really? No choice of an actual road bike? Not a good first impression. Is this a cycling app or what?

Errrr, that’s not a bike! Give me a damn bike!

I was programming similar graphics in the 90’s while still at school.

The retro style basic graphics didn’t give off a good first impression either. Okay let’s take a step back. CVRCade are a small company with a budget far smaller than Zwift, so I wasn’t expecting to have my mind blown by the Beta release. What I was expecting was a functioning application with decent graphics, promising features and and easy to use interface. Something that would tug at me to switch from racing on Zwift to racing on CVRCade. That’s not too much to ask for, right?

Instead we get a countless number of half baked and pointless features packed into difficult to navigate menus, most of which have absolutely nothing to do with racing or group rides. It’s like the creative department had a brainstorming session where they voiced every idea imaginable, then green lighted every single one of them! 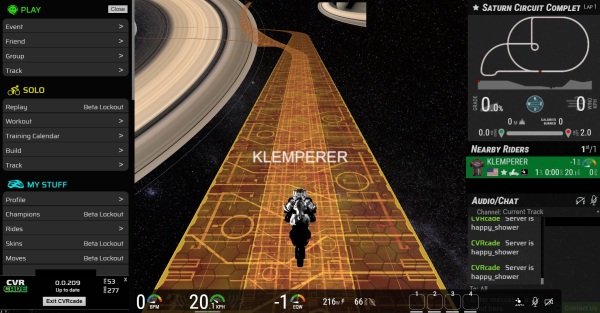 It’s hard to believe it’s 2019 and these graphics are legit.

The premise for CVRCade is the same as Zwift. Ride a virtual world alongside others. Race them, use the draft, simulate climbs and descents, etc. CVRCade also throw in extras like steering (using a keyboard), wind direction, numerous power-ups and you can even crash! I did… 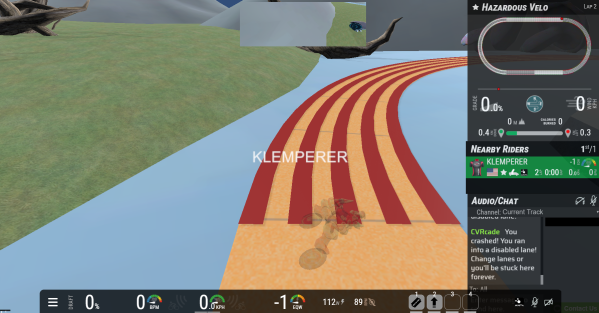 Oh look, I crashed into a red line. Sums up CVRCade in a nutshell.

The team behind CVRCade wanted to create a platform that was BETTER than the existing Zwift racing scene. Somewhere they could host all their races and build a solid community. Instead, they’ve given us, ummm, I don’t even know how to describe what they have given us. 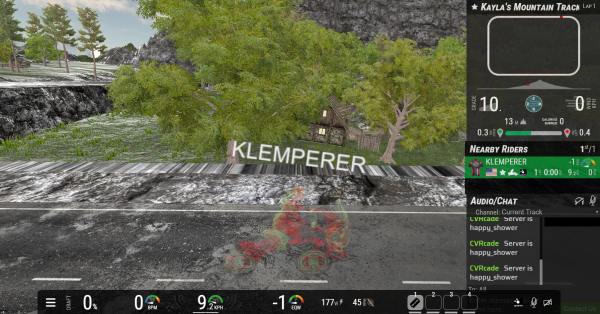 This world had the “best” graphics. 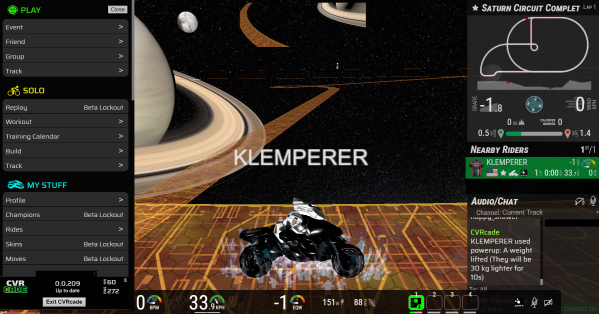 I activated a power-up! No idea how.

Instead of focusing on doing a couple of things really well, they’ve gone and done a thousand things really poorly. I could look past all this if the ride feel and user experience were passable, but even the ride is sub par. I found the gradient changes on my Tacx NEO to be way out of sync to what was on screen. I didn’t get to test drafting as I was the only person online at the time. Everything about CVRCade felt clunky and badly thought out. Nothing impressed or stood out. Nada.

That’s not to say CVRCade doesn’t have potential. Of course it does. Actually I’m not sure it does. How bad is that? If the team were to strip it right back and focus on a couple of good courses, a limited number of well thought out features and the RACING side of things, there could be hope (I’m trying hard to be positive here).

But right now? It’s a awful. Like truly awful. I’m actually struggling to write a single positive thing. It’s as if I’ve been suckered into an elaborate practical joke. I spent about an hour setting it up and learning the menus, then another hour riding. That’s two hours of my life I’ll never get back.

And I couldn’t even figure out how to upload my ride to Strava!

Let’s just say I’ll be sticking to Zwift or The Sufferfest for all my indoor training needs.