With the Tour de France kicking off this weekend, FulGaz have launched the French Tour, a 21-stage virtual cycling event hosted on FulGaz in partnership with (and raising much needed money for) the charity Lifeline. Riders from around the world have signed up to complete the tough course either as a solo rider or as part of a team, where the stages are shared out between members.

I’m riding as part of Team FulGaz with three other staff members. The event actually kicked off yesterday so I’ve already taken on the very first stage, Col de Turini. This was 14.8km climb averaging 7% and gaining over 1000 metres of elevation. Sure, it was virtual, but it was still tough. It was actually tougher than my virtual 100km ride earlier this month. 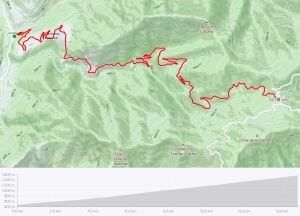 I completed the climb in 1 hour 15 minutes and 50 seconds, beating Mike (Founder of FulGaz) by a slim four seconds! Hey, a win is a win, right? Haha! Mike is actually riding the event as a solo competitor where he will do EVERY stage himself, so he was probably holding back a little. ;-)

I’ve got a few days rest now while the rest of the team take on their stages, but later on in the Tour I’ll be tackling the far tougher virtual ascent of Mont Ventoux! Not sure I’m looking forward to that!