Shimano Di2 electronic shifting – in Dura Ace and Ultegra variants – has been around for a fair few years now. A few product generations and subtle refinements have seen it perfected and take a stronghold in the higher end road bike market.

But still, one of the most frequent phrases bringing people to my site via search engines is “how long does the Di2 battery last.” For good reason too, it’s an important question to be asking! Nobody wants to be stuck miles from home with a flat battery!

In my original post I outlined exactly what to expect (you can read that by clicking here). But five years and many, many gear shifts down the road has anything changed? Well, let me tell you a thing or two about living with Di2 long term…

In short, Shimano Di2 is one hell of a groupset! It has blown me away how good it actually is. I’ve quite literally put hundreds of hours of riding, thousands of gear changes and many charge cycles through my Ultegra 10-speed Di2 over the past five years without a single hiccup.

There aren’t many products out there that I’ve used for a long period of time without any niggles, but this is 100% one of them. Not one issue. None. Nada. It’s simply bang on. I’ve crunched hard gear changes, sprinted while shifting from small to big ring, ridden through storms, left it mucky way too long, really given it a good hammering, all without it skipping a beat.

I rode to/from work 5-6 days a week while at Sigma Sports, clocking over 300km per week through sub zero temperatures, torrential rain, less than ideal road surfaces and everything the British weather could throw at me. I did as little maintenance as I could get away with! The shifting did not skip a beat.

Set up for winter duties. Di2 is up to the challenge!

I’ve hardly even had to adjust the mechs. I don’t think I’ve EVER touched the front derailleur and only micro-adjusted (using the shifters in adjust mode) the rear one two or three times. It. Just. Works.

I’ve even given it an absolute flogging on the turbo trainer!

Most importantly, the battery life is still strong. I’ve been running the original internal seat post battery since I bought the bike in 2015 and it’s still holding charge. I keep an eye on the level using the LEDs on the junction box and charge it up once it hits red. Never once have I run out of juice on a ride – or even come close! 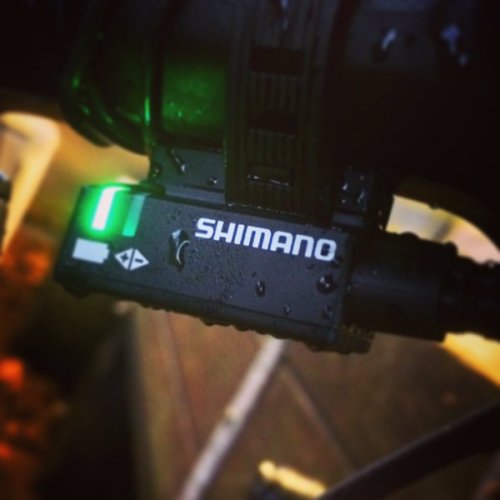 If you’re thinking about getting a new bike this year and have the cash to spare, I’d highly recommend getting one with Shimano Di2. At least take one for a test ride. Several generations down the track the technology is more reliable than ever and while it won’t make you any faster, it’s a luxurious touch that will keep you shifting perfectly for years to come.