Last Sunday a film crew from ITV’s The Cycle Show accompanied us on the regular first of the month club ride to Windsor. They were filming a piece on how accessible it is to join a club and how not all clubs are intimidating. We are a club that caters for all abilities and isn’t just full of svelte Lycra-clad racing snakes. Being very social and inclusive is an ethos at the heart of our club and one we strive to maintain.

Ex-pro cyclist and pocket rocket Rebecca Charlton accompanied the “social group” on their shorter ride to a local cafe, before shooting off to Windsor to join us faster lot for the ride home. I’d volunteered to lead a fast-ish group that morning so was chosen to be wired up and interviewed by Rebecca on the return journey! Here’s me getting mic’d up by the sound guy in Windsor: 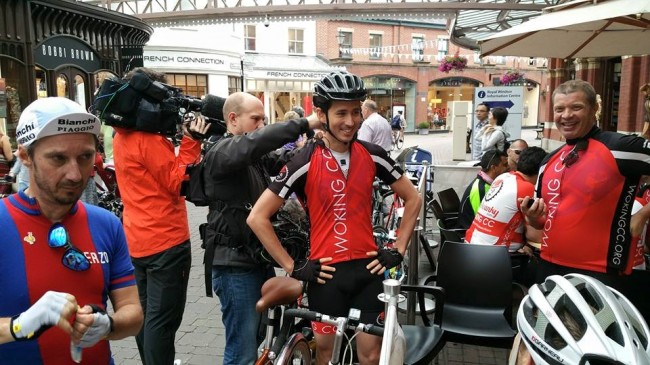 Rebecca and I rode on the front of the group and had a conversation about the club’s different levels and friendly attitude while the cameraman filmed from the back of a motorbike. There was also a quick interview afterwards back in Woking to finish off the piece. I’m totally not checking out her impressive track cyclist’s thighs I promise: 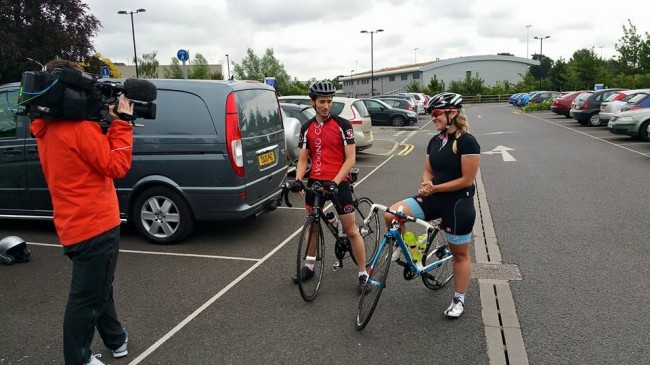 It was such an enjoyable ride with her in the bunch and she was a really good sport, having a laugh alongside all of us guys. It was also a surreal experience having a proper TV camera motorbike following the club ride just like on a pro tour. I even got to fly off the front of the group and draft inches behind it at one point! I could get used to that!

Hopefully the piece will air in a couple of weeks. #almostfamous