The 1st of September means one thing down here in the Southern Hemisphere; SPRING! Crisp, chilly mornings paired with clear blue sunny skies (or at least that’s what we hope for). With the Tour de France in full swing and a sniff of finer weather in the air, I decided to wheel my Project Postal Trek 5200 out for it’s maiden ride.

The US Postal Trek is not quite finished (are they ever?) but it’s “road ready” and I wanted to test the bike fit, so what better day than the first day of Spring and a Tuesday Bash ride to give it a damn good hustle!

Splash of yellow on the wheels in a nod to Lance Armstrong’s zero Tour de France victories.

And man oh man does it hustle! Hands down, this bike surprised me. Decked out with a spattering of modern parts and some high quality wheels, it really held it’s own. For most of the ride I totally forgot I was astride a frameset that is knocking on two decades old. I certainly had no trouble putting power down on the front to pull the bunch along into a headwind!

“Why don’t you come with me little girl, on a magic carpet ride.” – Steppenwolf

The ride was smooth, comfortable and QUIET! A real magic carpet ride! I couldn’t believe how quiet the bike was. I listened intently, but no, nothing, nada. Okay, so I had to adjust the front derailleur in the first kilometre to stop some rubbing in the big ring, but after that it was nothing but beautiful bike riding silence. Decked out in full US Postal team colours, she’s a real head turner too, especially for those old school cyclists who remember the Armstrong era. 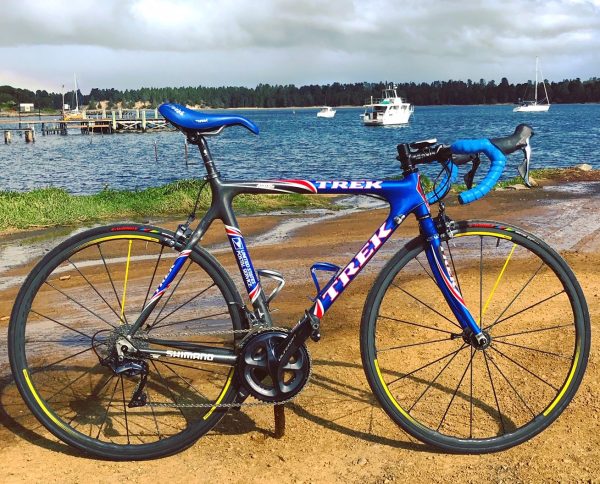 I’d set the fit up to get close to my Canyon, but because it’s such a different bike I must have got it slightly wrong. After about 10km I had to reverse the seatpost to get a more forward position, ease off the tilt and drop the post height by 10mm. From there it was “fine” for the rest of the ride. Not perfect, but enough that I could ride without discomfort and clock up over 70km with a smile on my face.

Once I nail the fit, this bike is going to be properly ace!